In 82 first class games Bruce McPhail scored 66 tries and this is a remarkable tally considering that 41 of these games were for Nelson and Mid Canterbury, lesser unions without the quality of players in a major province. In 1959 he notched hat-tricks in both South island trials and playing for Canterbury against Combined Services in the curtain raiser to the 3rd test against the British Isles he scored an astounding 7 tries. All in all he scored 20 tries in 1959 and, having played the 1st and 4th tests against the Lions was a contender for the All Blacks tour of South Africa. He missed selection but when asked some 50 years later how he felt about his omission his answer was measured and honest. “Well”, he said, “to tell you the truth I was not that sorry…I had a reasonable trial but did not get much ball…I had worked out that it was going to be a tough tour for wingers because of the ten-man rugby the All Blacks favoured and because of the bigger South African backs…they went for Dennis Cameron, a bigger winger than me.”

Bruce McPhail was born in Ashburton and attended Ashburton College but did not make the 1st XV and because he was working on a farm he played no rugby until 1956 when he was enticed to play for the Old Boys Club. He ended up playing 6 games for Mid Canterbury the next year and in 1958, encouraged by Ross Smith he joined the Christchurch Club when he came to the city to work for NZ Loan & Mercantile. His first encounter with Smith had been playing against him and the master wingman was in great form, “…he came at me, went sideways and I caught a blade of grass.”

Smith had said that Ken Osbourne may not be avaialble and “there may be a gap” so McPhail trialled under the watchful eye of Alan Cochrane, a well-regarded back coach. “I did not play well in the trial but Alan Cochrane still picked me… I played the first game but was well pleased to miss the Marist game. This was because four regular Marist players (Tom George, Ray Liddicote, Bill Devine and Colin Devine) had decided to leave the green and whites and join Christchurch and there was more than a chance it would be a tough encounter.

Bruce McPhail in the summer months excelled as a track sprinter at provincial centre level and so his natural pace as a rugby wing won him considerable notice and attention in the mid to late 1950s and into the early 60s. “It was a brutal game and I was pleased to be watching.”

Over the summer he had sharpened up his speed by doing track work and he found himself in the Canterbury team for the early season match against the West Coast. From there his rise was startling. He played in the South Island trial and in the i nter-island match. The next season he repeated these successes and was a late replacement in the All Black team to play the Lions at Dunedin. Recalling one of his early games for Canterbury he said, “I replaced Maurie Dixon who was injured…Alan Elsom, his great mate, was at centre and I could hardly lay a hand on his passes, they were all over the place…at half time Jack Morton came out and gave Elsom a telling off for deliberately throwing bad passes…he moved Ross Smith to centre and I had a much better second half.”

The circumstances around McPhail’s two tests in 1959 make interesting reading because in both instances he was a late selection and had some difficulty getting to the game.

“In the week of the test the Otago winger Tuppy Diack came under an injury cloud and McPhail was summoned to Dunedin…Bill Devine took him to the airport but there were no flights so Bill walked around until he found someone to swap…Tom Pearce picked me up and I got changed in the car and eventually got to the team training which Jack Sullivan was taking. He called the players together, introduced me and then said to Tuppy ‘well are you OK?’ Tuppy shook his head and Jack looked at me and said you’re playing.”

He played in Canterbury’s victory over the Lions and thanks in part to Colin McDonald’s silky skills at centre scored seven tries in the curtain raiser to the 3rd test. After this he was sent to Massey on a study course.

He was in a lecture when a message came through from the principal telling him, “to get to Auckland because Frank McMullen is unlikely to play.” So McPhail got himself on a train from Palmerston North and got there in time to find he was playing. The All Blacks and McPhail struggled to contain the talented Lions wingers, Peter Jackson and Tony O’Reilly. The Lions won 9 - 6 and it was a dazzling run by Bev Risman, who side-stepped McPhail, that clinched the match for the tourists.

Looking back on this match and his All Black career he said, “It was a great run, Risman had room to sidestep and I missed him…but it was great honour to play for New Zealand…I am happy with that achievement.”

After the 1959 season he left Christchurch and moved to Nelson. Between 1960 and 1963 he played 35 matches for that union. He was also in the combined Nelson, Marlborough and Golden Bay-Motueka team which in 1961 had the distinction of being the first side from this country to meet a French touring team on New Zealand soil. In the 26-11 loss McPhail showed he had lost little of his speed by scoring both the combined side’s tries.

While in Nelson he encountered Neil McGregor, the former Christchurch man. McGregor, by now in his sixties, had agreed to help coach the Nelson team. For McPhail it was a bit like playing for his old club again. “Neil’s philosophy was to “run the opposition ragged…and we played some good rugby with Neil.”

McPhail gave something back to rugby in the years after his retirement. He refereed and coached in both Nelson and Ashburton and remained prominent in track and field as a successful veteran athlete. 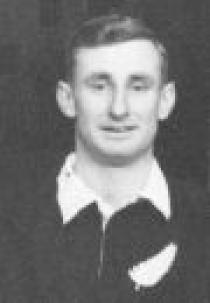