As Eric Harper’s rugby career with the Christchurch Club came to an end another great all round sportsman joined the club and his deeds set the template for try scoring wingers to the present. Frank Fryer came to the Club from Christ’s College where he had established a distinguished record as a sprinter, cricketer and rugby player. He quickly made his name at club level but his first games for both Canterbury and New Zealand overseas were nothing short of sensational. For Canterbury against South Canterbury in 1905 he touched down 5 times. Then against Queensland in the first game of the All Blacks 1907 tour he cut loose with 4 tries and followed with another five in the next game.

Frank Fryer was educated at Christ’s College and was the finest all-round athlete at the College in the first decade of the new century. He was in the 1st XI and 1st XV for three years and captained both teams. In 1904 he was the senior athletic champion and winner of the Open Fives championship. He held a strong affection for the main game of the college season to the extent that in 1906 the XV received a telegram of congratulations from the Canterbury team which was in Auckland for their win over Otago Boys High School. Interestingly Fryer captained Canterbury in this game which was a Ranfurly Shield challenge. On leaving College he joined the Christchurch Club and was quickly in the senior team and from there into the Canterbury representative side.

In his debut game, playing against South Canterbury, he scored five tries. On the strength of that display he had his first match against the touring Australian side as a member of the combined Canterbury-South Canterbury team. Fryer remained through his career a spectacular try scorer. He had a hat-trick of tries in Canterbury’s match against Southland in 1908 and was a heavy scorer when he was included in the All Black team for the 1907 tour of Australia.

Fryer played the preliminary match against Wellington and scored two tries but in some ways it was an unsatisfactory performance. According to the Evening Post report of the game he crossed the line for a try only to have the ball stripped as he went to touch down. Later in the game he knocked on in a try scoring position and his defence was somewhat suspect. This was not held against him and on the tour he played all seven matches in Australia, including the three tests. Though he failed to score in the tests he scored four tries in the first match against Queensland and five in the second.

His only other All Black game was in the second test against the Anglo Welsh tourists in 1908 .This match was a hard fought contest in atrocious conditions and the field a mud bath. There was very little passing and it was a game of dribbling and rushing - not a game for a winger. The match was drawn 3 all and Fryer was not selected for the third match of the series.

Fryer represented Canterbury until the 1910 season making 25 appearances and played four times for the South Island between 1906 and 1909, His final year for Christchurch was 1911 and he then transferred to Auckland and played briefly for the University club. His rugby career soon finished when he qualified as a dentist.

Like Eric Harper he was a competent cricketer and played for the Riccarton Cricket Club for 5 seasons. He was an all-rounder and was good enough to have played at minor representative levels for Canterbury and Hawke’s Bay, where he later settled. In his later years he turned successfully to golf, winning a national foursomes title in 1927 and becoming the president of the New Zealand Golf Association in 1954. 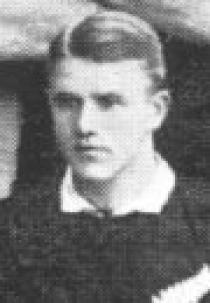