George Scrimshaw may not have been the last wing forward to play for Christchurch but he was certainly the most distinguished, having enjoyed a lengthy provincial career with Canterbury in his favoured position and also playing 11 games for the All Blacks, including the first test against South Africa in 1928. In truth however this was only part of the life-story of this good man whose origins were humble and whose working life was spent mainly in the freezing works, for a time as a union representative. At the time of his passing a colleague remarked that George had accumulated a “life full of friends” and his son, also George, said, “He was a man for all company from the street worker to the elite.”

Born in Christchurch in 1902 George Scrimshaw boarded at Waitaki Boys High School and was a member of the 1st XV in 1919 and 1920, playing as a side ranker. On leaving Waitaki he first played for the Cust Club, gaining selection for the North Canterbury Sub Union team. It appears he joined the Christchurch Club in 1924 and soon found a place in the Senior team. By this stage he had settled on the wing forward position but bizarrely made his debut in the seniors as a fullback. His speed and athleticism saw him adept at playing in both the forwards and the backs.

He represented Canterbury from 1925 to 1927 and in 1927 his form gained him selection for the South Island team. Significantly he was part of the Canterbury team which won the Ranfurly Shield for the first time in the union’s history. In the North - South game he scored 2 tries, as did his Christchurch companion Alan Robilliard, and contributed to the South’s 31-30 victory. This display earned him a place in the final trial where he marked the highly respected Cliff Porter, captain of the 1924 Invincibles. Scrimshaw’s good form continued and he scored 2 tries, clinching a place in the touring team and surprisingly displacing Porter. The Auckland Star said, “Scrimshaw was easily a better wing forward than Porter, who always tackled high. His was a waiting game and Scrimshaw’s a forcing game.” It is safe to assume that George was at the top of his form at this time and was a deserved selection.

The Auckland Star’s critical appraisal is worthy of explanation because for many years there has been view that Scrimshaw’s selection owed something to Cliff Porter’s fall from favour with the most powerful figure in NZ rugby at the time, Stan Dean. The autocratic Dean had been the manager of the 1924 team and some reports suggested that he and Porter had fallen out. Supporters of this view argued that Dean had placed unreasonable demands on Porter in terms of managerial duties and this had impacted on Porter’s form. It is worth noting that Porter did not play in the internationals in the British Isles despite being available.

On tour Scrimshaw was selected for five of the pre- test games and then won selection in the first test team. In this match the All Blacks were comprehensively outplayed and lost heavily by 17 - 0. The score may have been worse but for the courageous defence of the New Zealanders. Early in the second half Scrimshaw was moved to the mid field to stiffen the defence and so, in his only test, he was required to play out of position as the rugged Springbok pack dominated the scrums and enjoyed almost 80% of possession. As a result of this drubbing the tour selectors decided to beef up the forward pack and the comparatively lightweight Scrimshaw (76kg) was replaced by Ron Stewart, a heavier and more robust player.

In all he played 12 games on the tour and scored 5 tries. A report in The Press said of his tour that, “…he gave a good bustling display in the second game with Transvaal. After this game [his] play came in for criticism from South African writers who contended that he was off-side a lot.”

On his return from South Africa Scrimshaw continued to play regularly for Christchurch. This in a way was not surprising because the great team of 1927 had continued to flourish and the club was in good heart. In 1929 he scored a hat trick of tries against HSOB, in front of a crowd of over 10,000 at Lancaster Park. In all, he scored 50 senior tries, a notable achievement over 6 seasons.

In 1930, in what may have been his last game for Canterbury, he played a key role in the province’s victory over the 1930 British Isles team, scoring a try in Canterbury’s 14-8 victory. In the same season he was part of the Christchurch team’s 9-0 victory over HSOB, again touching down.

In the years following his retirement from active play he retained a strong interest in the Club, coaching and being a member of the management committee. His son George said that “he put back into football much of which he got out of it” and then laughingly recalled his own years as an under-age player playing in the same team as Richard Cottrell. “There were Beau Cottrell and Dad on the side-line, both All Blacks, and there we were on the field…bloody hopeless… but we hung in and they were both always there.” 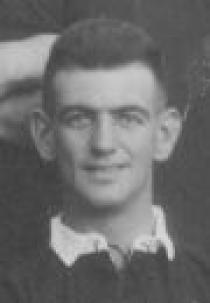