Great friendships endure and during the course of an interview John Hotop talked of his Christchurch teammate Ross Smith who, some years earlier had a critical, cancer-related, illness. As Ross’s life drew to a close Hotop drove regularly from Hamilton to sit with his friend at an Auckland hospice. As the weeks passed Smith’s illness worsened and he asked Hotop to take him home and not leave him in hospital. Retelling this story John Hotop paused as it came to an end and quietly said, “…so we drove up and took him home where he passed away…he was my friend… and that’s what you do for your friends.” This story was all the more remarkable because Hotop himself had suffered a number of health issues and had a leg amputated. It seemed that his own situation was of little consequence compared to that of Ross Smith’s and the poignancy of this retelling hung over the remainder of the interview telling us something of life-long friendships and echoing with human decency.

It was Ross Smith who encouraged Hotop to join the Christchurch Club in 1952. At the time he was at Lincoln College as part of his rural cadet training programme, and had already played representative rugby for Bush, Manawatu and NZ Universities - missing out on playing for Southland because of injury. And it was Smith who was to say of Hotop’s form in the year before he joined Christchurch: “on his 1951 form he [Hotop] was the best first five eights I have ever seen. He was fantastic that year and was like a will o the wisp.”

Smith’s view was echoed by the NZ Rugby Almanack which singled Hotop out for special praise naming him in the Almanack XV and saying of his play, “an outstanding success with the NZ University side in Australia, John Hotop can be considered unfortunate to be absent from New Zealand at the time of the trials, as his subsequent play showed him to be the country’s outstanding first five-eight.”

John Hotop was born and raised in Cromwell and receiving two years of his secondary education at Waitaki Boys High School where he was in the first XV for both years. By the time he left he was already being talked of as a player of some quality. Jim Burrows, the Rector, said to him on his departure, “John you will be a good footballer but in your first year out of school play at centre.” Hotop took his headmasters advice but failed to heed the words of another master ‘Eggs’ Hall, who said “avoid going down on the ball”. Hotop then playing for Bush forgot this advice and suffered two broken ribs as a consequence. Injury aside He did enough in his four matches to be chosen as one of the Rugby Almanack’s Five Promising Players and to appear for Wairarapa Bush against Wellington in a trial match for the 1949 All Black tour to South Africa.

In 1950 he was selected for the North Island Universities and the following year for the South Island and then NZ University teams. He toured Australia and played in all three matches, playing alongside the likes of Bob Stuart and Ron Jarden. On his return he was quickly into the Canterbury team and on returning from the North Island tour was approached by Leeds Rugby League club. The club also approached Tom Lynch and the invitation placed the young Hotop in something of a quandary. Recalling the moment he said, “I decided to go home and talk to my parents…Dad asked me what my most important goal in rugby was…I said to play for the All Blacks…and that was that… I never regretted my decision although it was good money.”

The following year he played in both tests against the touring Australians and despite struggling to strike a combination with Ponty Reid was pleased with his form and played a key role in the All Black’s second test win. Sadly injury was to blight the next two years and may well have cost him selection in the 1954 All Black team that toured the UK and France.

In 1955 he was back playing for Canterbury and was again in good form. The Press reporter who watched him play against Old Boys in the championship winning team wrote of his play. “Hotop was outstanding. His almost flawless handling, his beautifully directed line and positional kicks and his sound stopping of forward rushes were features of his play and features of the game. It was unfortunate for the team when he was compelled to leave the field ten minutes before the end of the game, although he had done more than his share up to that time. Hotop has never played better.”

When Hotop talked about his test matches there was a sense of frustration that circumstances beyond his control worked against him. He played in the third test against Australia and looking back was still angry at the way the All Blacks played and some of the selections. “It was a bloody rudderless ship with Ian Clarke, a prop, playing number eight…I ask you who would move a prop to that position for a test.” He struggled to strike a combination with Lindsay Townsend, the half back who was used to passing to a standing first five-eight. “ I always ran on to the ball and had played with half backs like Pat Vincent and Brian Molloy who never gave you the ball in a bad position…Lindsay just seemed to chuck it anywhere”.

This was to be the last of his matches for New Zealand. In 1956 he moved south and played for Otago for two more years but struggled to adapt to the Otago style which was vastly different to that perfected by the Canterbury team during its Ranfurly Shield era. Returning to Christchurch and living in Darfield he was encouraged to make himself available for Canterbury and played for the South Island again in 1960.

In the final analysis his rugby career was thwarted because of injuries and this is sad because Hotop was a masterful player who embraced attacking rugby. It is no stretch of the imagination to place him alongside the Club’s great tens - George Helmore, Neil McGregor, John Hotop and Bruce Watt, it is a talented line-up of astute and talented men, who commanded the field and made play for others. 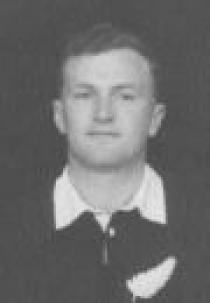