Little is known about Morrie Wood other than he was a gifted rugby player and athlete. He had 9 years of representative rugby behind him before joining Christchurch but his abilities and leadership skills were quickly noted. The few remaining annual reports from the early 1900s paint a glowing portrait of his playing ability and leadership skills. A brilliant individual try saw him gain selection for the 1903 touring team and it was on this tour that New Zealand played its first official test. In some circles there is an argument for listing All Blacks from this date but the recent numbering of All Blacks now goes back to the 1884 tour. Depending on preference, Morrie Wood may have been the club’s first official All Black.

Morrie Wood had an extensive first class rugby career, representing 4 provinces on his way to becoming an All Black and finishing with the Ponsonby Club in Auckland, representing that province once against the Great Britain touring team in 1904. A recurring knee injury forced his retirement after this match.

His tenure at the Christchurch Club was relatively brief but he was given fair praise for his efforts in the 1903 season, the annual report noting that the “senior field captain, ME Wood was again the mainstay of the team, on several occasions his play being exceptionally brilliant.” In the inter-island match that year he scored a brilliant try, running through half the North Island team to score between the posts. This earned him selection on the 1903 tour of Australia playing in nine of the ten fixtures and earning praise for his solid play, mostly at 2nd 5/8.

Described as a very good defender and a dazzling attacker he made his debut for New Zealand in 1901 against Wellington and NSW. In the first of these matches he scored a try and kicked 4 conversions. In all he scored 34 point for New Zealand.

In addition to his rugby skills Morrie Wood was a talented athlete, winning the national long jump title in 1904 and representing Hawkes Bay in Hawke Cup cricket.

A wanderer, Wood represented six clubs and five provinces during his career, and became Ponsonby’s second All Black in 1904, his final season in the game. Born at Waipawa in Southern Hawkes Bay on 9 October 1876, he broke into representative rugby as a 17 year old in 1894 with the old Bush union. He continued to represent that province until 1897, moving to Hawkes Bay for the next two seasons.

He then moved on to the capital, turning out there for two years and winning his first All Black jersey in 1901, playing against his own union and the touring New South Welshmen. He continued south in 1902, playing for Canterbury and South Island both that year and the next. No All Black team was selected in 1902, but in 1903 Wood was regarded as one of the key players in New Zealand, and was one of the first picked for the tour.

It was generally agreed by all critics that Wood played the finest football of his career on that tour. The All Blacks, despite losing their shake-down match to Wellington before departure, returned home with an unblemished record, scoring 276 points to 13 in their ten matches. Although an accomplished goal-kicker, Wood was not required in this role (Billy Wallace was more than adequate), but still made a material contribution with a couple of dropped goals and five tries, including three against Combined Western Districts. There was no question about his right to play in the big match of the tour; the All Blacks’ first-ever test. Wood gave his usual sound performance, as well as claiming one of the marks which Wallace turned into a goal.

Bernard Fanning, a player of some distinction in the 1900s wrote a book Players and Stayers. He toured Australia with Morrie Wood in 1903 and described two incidents which shed some light on Wood.

Responding to the question about the most impressive piece of individual play he ever saw he said, “When Morrie Wood played for Canterbury he got a try against Otago in Dunedin in 1903. He got the ball at the centre flag and went right through the crowd [Otago]. He wriggled, through he went through like a snake; men put out their hands, they clutched at him but they caught nothing, he was gone.”

Fanning was also able to comment on the funniest thing he saw on the field and said Morrie Wood at the Sydney Cricket Ground. “He was bolting for a try and went out of bounds when cutting in at the corner. He didn’t know he was out but the crowd did. They thought a try might be ordered and they did their best to stop it. They pelted Morrie with oranges and lemons - enough fruit for two years…at a rough estimate.”

Although nearing the veteran stage in 1904, Wood was welcomed with open arms by Ponsonby when he moved to Auckland. He was unable to inspire the club to any great heights in the local championship, but still won a place in the New Zealand side which met the British tourists in what was regarded as the biggest match undertaken by the national side to that time.

The local fifteen provided great excitement by winning 9-3, especially as the tourists had just completed an unbeaten run through Australia. Duncan McGregor was the special hero, with two tries, but all fifteen had played their parts. Wood had been heavily involved in the build-up to McGregor’s second try, which made the game safe for New Zealand. 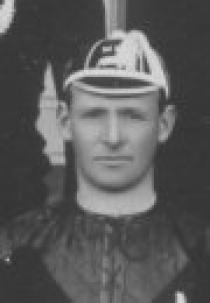