Peter Harvey’s rise to the All Black’s was meteoric. In 1900 he joined the Christchurch Club and began in the third grade team. By the end of the season he was in the Canterbury team and played four games in his debut season. Yet by 1905 his provincial and international career was over mainly because he could not obtain leave to tour, firstly to Australia in 1903 and then on the ‘Originals” tour of the British Isles and France in 1905. This dash to the top could be an indicator of a bright fading star but the Annual Report for the 1949 season concludes with the lines, “He was truly a great rugby footballer, always played the game, and was popular with all, and his passing is mourned by all who knew him.” Noble words for a man who as a player, coach and administrator, never stopped supporting his Club but they say nothing of the countless number of afflicted children he taught and helped at Sumner’s School for the Deaf and Mute. This was his real calling and for 37 years he devoted himself to his charges in an age when the rest of society tendered to shun those with such disabilities.

After a very encouraging test match debut in 1904 Peter Harvey was selected in the preliminary touring party for the 1905 tour of the United Kingdom and France. This preliminary grouping of 24 were what may be called certainties and as rugby history has shown the name of this touring team was ‘The Originals’ , that is to say the first of the All Black teams to tour Great Britain and France. Sadly for Peter Harvey he was unable to obtain leave from his job at The Sumner School for the Deaf (now Van Ash College) because he was the only lip-reading teacher in the South Island. The matter was taken to the Premier of the time, the redoubtable Richard Seddon, but he refused to intervene, thus Peter Harvey’s international rugby career ended. Two years earlier he had declared his unavailability for the 1903 tour of Australia. Fortunately for the Christchurch Club his passion for the game endured and for the next 40 years he loyally served the Club and the game.

The story around his forced unavailability for the 1905 tour tends to lay the blame on Dick Seddon, the Premier, who was very much a popularist and would normally follow a course of action that would benefit himself. The real villain, if that is the proper word, in this story is the somewhat dictatorial principal of the Sumner School for the Deaf and Mute, Gerrit van Asch, a Dutchman and an acknowledged expert in lip reading. Peter Harvey was taught the techniques for lip reading by van Asch and was to spend 37 years of his life working at the Sumner institution before retiring at the end of 1933. In” They Hear with Their Eyes, the centennial history of Van Asch College” the author Bernie Allan sheds light on the unavailability legend and on Peter Harvey, the man.

He wrote that, “Harvey had been selected to tour with the 1905 All Blacks. Van Asch however had dug in his toes, refusing to give one of his key teachers leave of absence to travel with the team. Van Asch is reported to have said when Harvey asked him for leave, “No you stay here and teach the deaf but as compensation as you are contemplating marriage, you and your bride to be may live in residence at the school… Harvey settled down throwing himself energetically into his work at Sumner.”

A former student at the time had Harvey as a teacher for two years. “He remembered how Harvey used to join in games with the boys especially marbles, when - in fun - he would try to cheat. But the boys would always catch him out. At weekends he would sometimes take the boys rabbit hunting on the hills behind the school…One day, the boys teased Harvey by telling him there was a rabbit behind a particular bush. He stalked it carefully ready to kill it with a stick, when he realised the boys had planted a dead rabbit in the bush he joined in the peals of laughter.”

Of such stuff are good teachers and good men made.

While he only played the one match there were high levels of expectation about his playing future and his debut bore witness to these hopes. The Evening Post report of Peter Harvey’s only test noted that he, along with Duncan McGregor, Billy Wallace and Billy Stead, “showed great judgement and seldom made a mistake”. Francis Cowlishaw, an old Christchurch man who had also played in England, commented to the Christchurch Press that “Harvey was very good on defence.”

These reactions were confirmed by J K Moloney in his book ‘Rugby Football in Canterbury’ where he wrote that “Peter Harvey made a phenomenal rise, and in a night acquired a national reputation. He was a small nuggety man, whose forte was defence. He used the line repeatedly, saved his forwards all the time and possessed cover defence of rare quality”. Glowing testimony, but how would Moloney have known so much about a man who played almost before Moloney was born?

The answer to this and to Peter Harvey’s rapid rise through the grades may well lie with WG (Gun) Garrard, author of the first history of the CRFU and a national selector in 1904. It would seem that Moloney’s comments about Peter Harvey were in fact Gun Garrard’s and that it was Garrard who may well have pushed Harvey’s case for selection. Garrard had played for the Christchurch Club in the 1880s and had a soft spot for the “old club”. Coincidently, another Christchurch player, Eric Harper, also made his debut in the 1904 test against Great Britain.

Peter Harvey was selected for the All Blacks half back but was also a highly capable five-eight. It was in this position that he starred in the 1900 championship winning team. A contemporary said of his play in this game, ‘it was his kicking and fielding [of the ball] that staved off defeat”. On his retirement from playing he served on the committee and coached for many years. In 1924 he was elected a Life member, a thoroughly deserved honour.

Footnote: For the author the story about the decision to refuse Peter Harvey’s request to get leave to tour with All Blacks has been an irritation. It would seem churlish to refuse a man twice, one in 1903 and then again for the 1905 tour. A note in “They Hear With Their Eyes”, the centennial history of Van Asch College refers to a visit to the College by Richard Seddon who visited to check out a letter of complaint from some senior students. This in itself was a highly unusual thing to do but it was shortly after this that Harvey was refused permission to tour Australia. Later it was Seddon who declined the request to tour in 1905. The nagging question in all of this is - was Harvey being punished for the sending of the letter of complaint. It can only be conjecture but the likelihood of a group of deaf students writing to the Premier in 1903, by themselves, is unlikely. 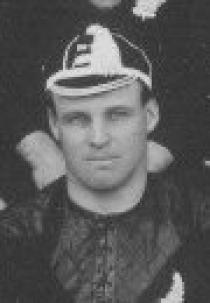