The demands on top rugby players are both physical and mental. In addition to the harsh regime of training and playing are the confounding influences of ambition and expectation. Running alongside these inter-acting components are public and private expectations. Richard Wilson’s career in rugby touches, at different times, on each of these factors. For Wilson, a highly talented fullback, who played seniors in his first year out of St Andrews College, the first hurdle was the legacy of Fergie McCormick, the legendary Canterbury custodian. The second hurdle was the arrival at Christchurch of Robbie Deans, a stunningly talented first five-eight who ironically switched to fullback when Wilson was away with representative teams. Compounding the latter obstacle was a series of concussions that were to eventually force his retirement. Taken in total these things may have had the potential to cast rugby out of his life but this was not the case. When interviewed his passion for the game was unequivocal, “you know I never played the perfect game, I was always striving for that next level…those years are an experience I will never forget because I just loved playing rugby... when I finished I coached and refereed but it was never the same.”

Just as Mark Mayerhofler’s rugby career transcended the amateur - professional divide so Richard Wilson’s can be seen to cover the change from toe-kicking to ‘round the corner’ goal kicking styles. It can also be said that when he began playing senior rugby in 1972 the focus was still very much on the senior club competition but when he retired in 1981 the provincial rugby championship had come into being and the NZRFU had a full programme of Colts and Junior fixture that took players away from club rugby.

He was educated at The Cathedral Grammar School and St Andrews College. Big for his age he was initially a forward but the astute John Irving moved him to fullback and put him in the 1st XV as a fourth former [Year 10]. This far-sighted decision may have been because his father George had played for Canterbury and Christchurch in the position and was a very capable player. He was to spend four years in the team and in 1971 it won the College competition with Wilson playing alongside future Christchurch men such Mike Nutt, Scott Cartwright and Paul McEwan.

Wilson’s promotion to the seniors could not have come at a better time because the decade of the seventies was to be a golden period with 6 outright or shared championships, one first round cup success and one grand final runner up. He was a critical factor in those successes scoring over a thousand points, easily a club record at the time, and proving to be a dangerous runner with the ball and a prodigious punter. As Jerry Rowberry said, “Dick would always keep the ball in front of us…we never really worried about him.”

In 1973 he made his Canterbury A debut playing against Mid Canterbury and though he continued to represent the province up until 1981 he had only three seasons, between 1977 and 1979, when he was the regular first choice. Initially he was destined to wait in line behind Fergie McCormick, an institution in Linwood and Canterbury teams and a player who set a benchmark for fullback play that few could hope to emulate. Invariably Wilson was compared to McCormick and for arm-chair critics there was only one ‘Ferg.’ Wilson said that he always tried to play his own game and whereas McCormick thirsted for confrontation he preferred to create space for his wingers and keep the ball moving. “I really enjoyed the Christchurch style…we were given the confidence to throw the ball around…it was very different to the way Canterbury played and when Grizz Wyllie was coming to the end of his career they kept it very close.”

In 1977, with McCormick out of the team, the great debate in Canterbury rugby circles was his successor and who would play against the 1977 touring Lions. By this time Wilson had played for the All Blacks in Argentina and also represented the NZ Colts and Juniors. The selectors Tiny Hill and Derek Arnold, both Christchurch men, opted for Doug Heffernan, the long-striding University fullback. Canterbury narrowly lost with Heffernan missing a number of goal kicks.

Undeterred, Wilson continued to play good rugby for Christchurch and worked his way back into the Canterbury team and the All Blacks. In 1978 he was a replacement fullback on the tour of the United Kingdom and in 1979 he played both unofficial tests against Argentina before again touring England and Scotland in what was an abbreviated tour.

Looking back on those tours he said that playing under Jack Gleeson in Argentina and the UK was a great experience. The return tour of England and Scotland as the number one fullback was for him an enduring memory. “It was a tough tour and we battled away but playing for the All Blacks at Twickenham was the closest I got to fulfilling my rugby ambitions.”

The 1980 tour of Australia under Eric Watson was not a pleasant memory. “I lost a bit of form and as a result became pretty wound-up and lost confidence…Brent Codlin took my test spot and by the end I just wanted to get home”. It was a tour where two senior All Blacks led the team astray and this did not help things.” He did not play for the All Blacks after this tour and so finished with 272 points in 25 games. On his return he found that Robbie Deans had supplanted him and over the next two seasons played only 7 games for the Canterbury A team.

His statistics however make for interesting reading because at the time of his retirement he was 10th on the all-time table of points scorers with 885 points from 111 first class matches. Having set a personal goal of scoring ten points in every game he played, he exceeded this playing for New Zealand but was shy of it in his overall record.

The rise of Robbie Deans forced him to take a step he had never thought he would have to contemplate and that was to leave the Christchurch Club. “I still had ambitions and if I couldn’t play fullback things were not going to happen so I decide to join Merivale…it was a very hard decision to make because it was in the middle of the season and it was not straightforward…in the end the Club [Christchurch] was really good, they did not stand in my way and I have never had anything nasty said about me going to another club.”

He played club rugby for another season but recurring concussion forced his retirement. 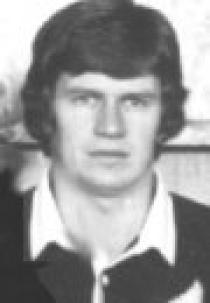