Photographs can be a window into a person’s soul and in the case of Bob Duff this may be partly true. One photo shows Bob Duff leading the All Blacks on to the field in the ‘must-win’ third test of the 1956 series against South Africa. There is a look of steely determination in Bob Duff’s eyes but the furrowed brow beneath his headgear bears testimony to the burden he is carrying, for this match had assumed an importance beyond the normal such was the collective national hysteria attached to winning. Years later Duff was to tell the author Paul Verdon that Tom Morrison, chairman of selectors, said that, he hoped no players in the future would be subject to the pressures and tensions of those matches.” It is a matter of record that Duff led the All Blacks to victory and this ensured his place in the nation’s heart. The other photograph shows a group of Christchurch Club members working on the new clubrooms at Bangor Street. Bob Duff is there, lending a hand and enjoying the company of his club mates. Just as the 1956 series was a job finished well, so too were the new clubrooms and this project ensured the future of the club for the next 35 years.

To his rugby friends Robert Hamilton Duff was ‘Bob’ or ‘Duffer’ but to Lyttelton people - those who he grew up with, worked with and played golf with he was sometimes Bobby, presumably a childhood name. In a way each of these references tells something of the man and the different worlds he lived in, for each in way carries taints of friendship and respect.

Bobby Duff was born in Lyttelton in 1925 and raised in this port town. He attended that great rugby school, Christchurch Hoy’s High School and was in the 1st XV for two years in 1942 and 1943. Interestingly his captain in 1943 was Pat Vincent, later to captain Duff for Canterbury, the South Island and New Zealand - before Duff himself displaced him for the famous 3rd test. He was also the senior swimming champion. On leaving school he joined the Christchurch Club and was soon in the senior team as a tall and lightly built lock forward.

Over the years his frame filled out and at his playing peak he was over 1.90m and 105kg - big for the time. His first game for Canterbury was in 1945 and made his debut for the South Island as a 20 year old in 1946. In 1951 he was selected for the All Blacks tour of Australia, playing in all 3 tests. Thereafter he was an automatic selection, missing one test in 1955 against Australia and also missing the 1953/54 tour of the United Kingdom and France. The 2007 Rugby Almanack noted that had he been available to tour, “…it is likely he would have been regarded as one of the great All Black locks.” His decision not to tour had been made because he wished to devote time to his newly established accountancy business based, not surprisingly, in Lyttelton.

Like many players over the years his reputation was enhanced during Canterbury’s successful Ranfurly Shield tenure between 1953 and 1956. This was one of the great Shield eras and the Canterbury team played an attacking style. John Hotop, a contemporary of Duff’s said, “It was great rugby…Jack Rankin encouraged us to attack and to sort things out ourselves…we always thought we could score a try, no matter where we were on the field.” Christchurch played a similar game and while Duff was a firm believer in forward supremacy he understood the need for the backs to play their part.

Championship successes for the Christchurch Club had been few and far between. The drought ended in 1955 when he captained the senior team to the final of the championship. In muddy conditions the match was drawn 3-3 and Duff earned praise for his lineout work and application in the tight and these attributes were to be part of his game. This shared title was a tribute to Duff’s leadership and his steadfast determination. A year later, when Canterbury defeated the Springboks, he was again in tremendous form and played a leading hand in Canterbury’s only try. The Press report of the match described the action, “from a lineout outside the Springboks twenty-five [line], two minutes after the opening whistle Duff barged through the lineout and handed onto Hill who sold a dummy before passing to Hern who passed to Buxton who went over.”

His contribution to rugby did not end when he retired from the game. For some years he had been player coach of the seniors and was always on hand to assist. He trod the three tiered ladder to coaching the All Blacks, firstly with Canterbury between 1963 and 1966, then the South Island (1967-73). In 1973 he became the All Blacks coach and after a series win over a very weak Australia team he headed to the British Isles with a very young and inexperienced team. The tour was difficult and with the sending home of Keith Murdoch it threatened to fall apart. Like Jack Manchester in 1935 Bob Duff’s reputation suffered and there is a need to put some perspective into his achievements.

By 1971 Fred Allan’s great team of the 1960s had all but disintegrated. The 1971 Lions had cruelly exposed weaknesses in New Zealand’s forward play and there was every indication the inexperienced 1973 combination was going to be in for a tough time. In addition the team had a hard core of players who were to prove difficult to manage. The so-called “black hats” brought no credit to themselves off the field and failed to give the leadership older players on previous tours had provided. Possibly Duff spent too much time with Alex Wyllie and Alan Sutherland, both black hats and both known to have exercised some authority over younger members of the party. The team beat Wales, Scotland and England but drew with Ireland and lost to France. At times Duff may have focused too closely on the forwards but he succeeded in restoring the forward play to the previous high standards and the players he developed were to prove the back bone of all Black teams for the next 8 years. More importantly he held the team together after Murdoch’s departure and with the manager, Ernie Todd, not in good health it was ‘Duffer’ who stepped into the breach.

The Rugby Almanack’s obituary of Bob Duff perceptively noted that, “…he had led a full life in rugby, racing and within his community, a quiet modest man whose contribution to rugby had been greater than he has been given credit for”. It may well have added that he was a popular and highly esteemed Christchurch man, in the great tradition of Millton and Manchester, and was not without a sense of humour.

In 1974, possibly in the wake of the fallout of the 1973 tour, Tommy George asked him to assist with a struggling Under 20 team. On the Saturday night at the clubrooms Tom acknowledged Bob’s efforts and asked him to speak. In a droll manner, belying his rugby-status Bob said to the massed teams, “well thank you Tom…to be honest and I have played a lot of rugby as you know...but I have to say this is the first time I have coached a team with a Maori, a Chinaman and Dutchman in it [loud laughter]…to be honest I struggled and was not happy with you but it’s been good fun…and I thank you for the opportunity.” 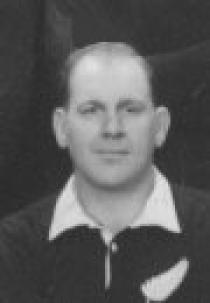